The Hoax of a Lifetime

Wolfgang Halbig’s grandparents raised Halbig in the town of Heidelberg (State of Baden-Württemberg), until the age of twelve – twelve, or fourteen, or sixteen – but Wolfgang usually claims pre-teen.

Halbig’s grandparents brought him up as a Catholic while in Germany, but would claim no faith as an adult.

According to public statements made by Wolfgang on multiple occasions, he never knew his father. Wolf claims that his father was “in a concentration camp for three years,” sometimes saying the camp was located “in Posen, Poland.” This would presumably indicate Stalag XXI-D.

Relocation to the United States

In 2012, Wolfgang gave a deposition as part of a civil lawsuit. In this deposition, Wolf explained the circumstances of his move to the United States of America.

Wolfgang: Well, I never knew my mother till age 12. The week that I was confirmed in the Catholic Church, she shows up with this military guy. They’re married, and she tells me and my grandparents (who raised me up to this point), that “you’re going to the United States…” so I saw my grandparents having a huge fight. And the next thing I know, I’m headed to Ramstein Air Base and I’m coming to the United States. I got my shoes and I was displaced from my grandparents and I was not very happy about it, ’cause I never knew her… 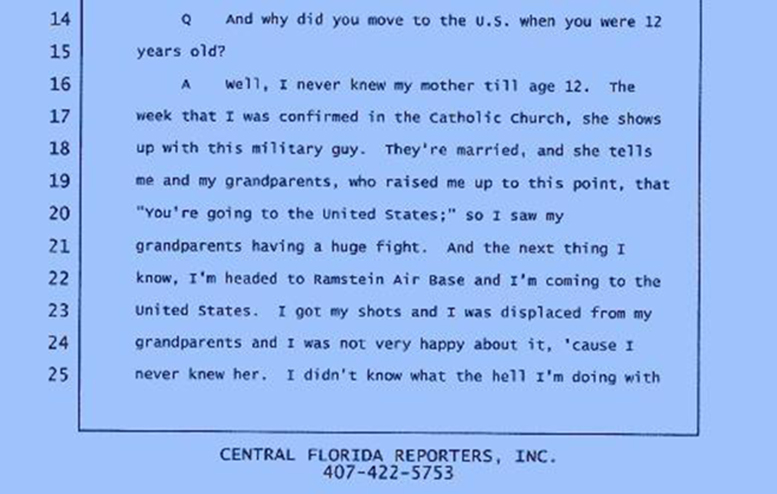 In the United States, Wolfgang’s mother raised her son in Avon Park, Florida.

From age twelve through high school, he picked fruit to earn money, according to the comments made under Wolfgang Halbig’s name to CNN news stories in November of 2012. Wolfgang Halbig writes:

“I picked fruit at age 12 all through High School to help my mother and I liked it because I got paid for my work.

The Mexicans are taking the blacks jobs because the blacks see those jobs as demeaning to their status in America.

Rosa Parks fought for the right to be in the front of the bus and now in Public Schools blacks ride in the back of the bus and beat up the kids who won’t let them.

How times have changed.” 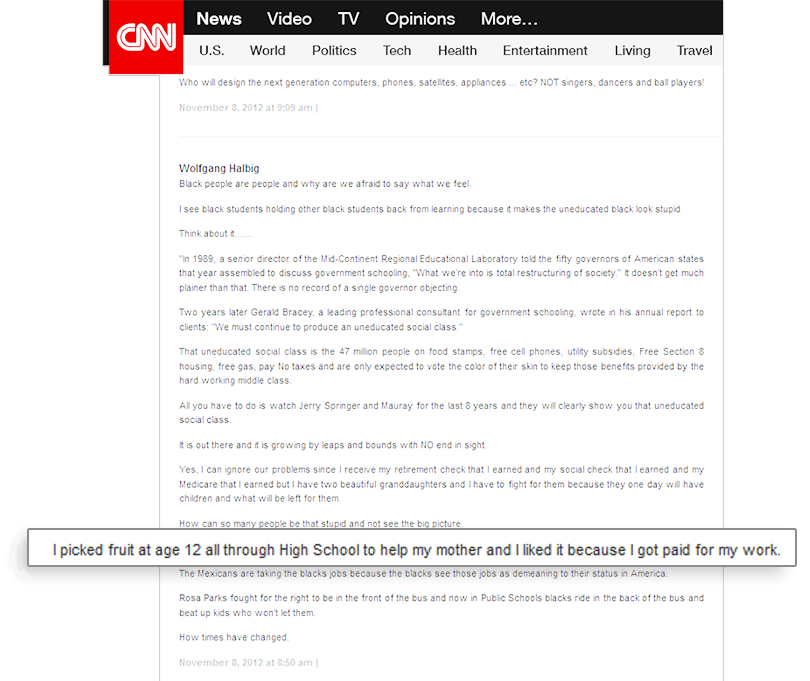 Wolfgang Halbig finishes his senior year at Avon Park High School and plays on the football team. In a 1971 profile in the Abilene Reporter, Wolfgang looks back and remembers complaining to the coaching staff about the physical pain the other players caused him.

Living in Avon Park, Florida, Halbig said Avon Park High School asks him to play football (even though he couldn’t speak a word of English at the time) “because they thought I was big so the first thing they had me playing was center.”

Recalling this, Halbig added laughingly, “But then I got tired of getting beat up all the time because I was German and didn’t understand the game of football. They told me all I had to do was bend over and snap the ball whenever the guy said a certain number.”

Halbig complains to his coaches because he feels “beat up” all the time. The coaches move Halbig to halfback.

Wolfgang graduates from Avon Park High School. To this day, Halbig cannot explain how this could be possible, given his abysmal academic performance.

Wolf is playing Defensive Halfback in Coffeyville, Kansas. In his later deposition, Wolf would explain that this school was a “Junior college for Florida State players who couldn’t speak English.”

Wolfgang “transfers to Florida State University” from Coffeyville and unable to enroll in classes because Halbig never registers for the draft. He soon winds up joining the United States Air Force, claiming that he “had no idea” that there was a draft.

The “Kraut” as he’s called by fellow Wildcats at ACC, signed a scholarship to attend Florida State University. “But, not speaking English too good, they thought my chances in a four-year school were bad and they thought I couldn’t make it because of the English problem.” With that in mind, Halbig entered Coffeyville Junior College in Coffeyville, Kan., on a football scholarship. He played a year there and his team went 9-1 with Halbig making All-Conference as a linebacker.

However, an unusual happening came to pass. Halbig was informed he hadn’t registered for the draft (something he had no idea existed) and he joined the Air Force rather than go in the Army. Halbig had been stationed at Dyess Air Force Base when he got out. He then strolled over to the campus of McMurry College asking about a football scholarship and Buddy Fornes asked him to come to their spring tryout camp. In the meantime, Halbig inquired across town at ACC and Wally Bullington took a look at the fit German and said he could use him at ACC. (Abilene Reporter, Sept. 8 1971)

In 2012, Wolfgang claims the Army drafted him just before he enlisted in the Air Force:

Question #1 Wolfgang Halbig MUST answer: You were going to high school in America in 1965 and you didn’t know that the United States had a draft? Nobody on your football team mentioned Vietnam once? How is that possible? Were you trying to dodge the draft?

Wolfgang “The Kraut” Halbig stationed at Lackland Air Force base, and then transfers to Dyess Air Force Base in Abilene, Texas.

NOTE: Entries from Halbig’s 2012 resume listed as “The Truth According to Wolfgang”:

Wolfgang becomes a naturalized citizen in Abilene, Texas. This moment — reciting an oath of citizenship with his “right hand raised” — becomes a story that Wolfgang would recycle over and over for the rest of his life, often in the context of assuring an audience of his patriotism.

Wolfgang Halbig in the 70s

“Halbig, who will be discharged from the Air Force this summer, has been a baseball and tennis star at Dyess.”

Article mentions football recruit Wolfgang Halbig as being “a 200-pound linebacker from Dyess by way of Florida and Coffeyville Jr. College.”

Wolf noted as a “newcomer” at ACU, expected to play tight end.

November 4, 1970: The Kraut noted as having a bruised kidney.

Various sports headlines throughout the Fall:

Wolfgang Halbig of Abilene Christian College telephoned to report he WILL be the Wildcats’ fullback this fall. We had reported that Halbig had been shifted to fullback and should add power “if the coaches leave him there.” Halbig was somewhat upset over the statement as he is confident he will be at fullback. We did not know anything Wolfgang didn’t know so will confess, Wolfgang, that you [fragment ends]

Halbig, the enthusiastic Air Force veteran, is going after daily drills in a big way. The native of Germany runs the swimming pool at the Dyess Officers Club, teaching lessons and also getting in some swimming exercise in the mornings. He works 40 hours a week and works out every night. Halbig is running four miles every other evening, doing quick starts and sprints, riding a bicycle, lifting weights and playing catch the other afternoons. “I do it because I want to be ready,” said Wolfgang. “No second team for me. I want to start.” Halbig, who now weighs 208, says he wants to play at 205.

The Kraut injures himself in a car accident.

But some athletes have managed to land more exciting, glamorous positions than others. Take for instance football fullback Wolfgang Halbig, who is a lifeguard and swimming instructor for the Officers Club at Dyess Air Force Base.

More sports headlines from this period on The Kraut:

“Halbig Likes Switch to Fullback at AAC” – A detailed profile on Halbig’s path to Abilene Christian University is published. Wolfgang Halbig has by now been given nickname “The Kraut.” He complains about his position on the team and openly admits that he resents being passed over for a scholarship by the team’s upcoming opponents, McMurry University. He also shares that he did make the starting lineup, as he said he wanted to on July 17, but only because someone else got injured.

Halbig, 25, recently was sidelined with a bruised kidney and didn’t return to drills until Monday, although he’s been running through some passing patterns in shorts. His main challenge this year, he said, is to make the starting lineup. “I don’t want to make it this year because somebody is injured. I did it last year and I think it’s a poor way to have to start.” Halbig is bent on making it big on his own because “I want them to realize that I do have the potential to be a good ballplayer.” The deeply sun-tanned German stated definitely he has no plans of trying to play pro ball — even though he has the smarts and physical attributes to make a good go of it. “I’m more interested in teaching and going into coaching,” noted Halbig seriously. “I think by the time I graduate from Abilene Christian College I’m going to enjoy looking forward to going out, making a living and teaching the kids what I know.”

The Kraut sees a good season for the Wildcats this year because of depth, despite the fact ACC lost some top players through graduation last year. Of the ACC-McMurry clash Saturday: “I just hope that I can prove to ’em that they missed their opportunity by not offering me a scholarship. I think they realized that last year when I played against them. I didn’t have a great game, but they knew I could play ball.” The game, as a whole, should be a good one said, Halbig. One thing’s for sure — Wolfgang Halbig will see action. He expresses no qualms at not liking the idea of being a utility man. Wolfgang Halbig is a ballplayer and plays his heart out whenever he’s called on.

The Optimist publishes a list of “freshman women” that Wolfgang Halbig determined to be “most datable” and imply Wolfgang is a notorious womanizer: 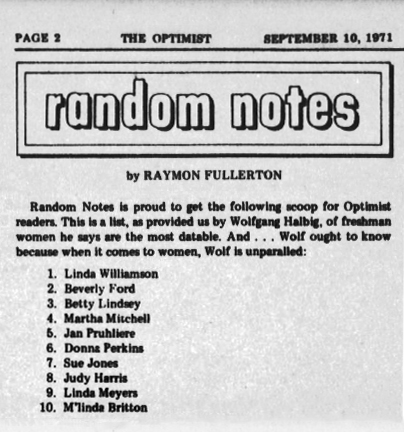 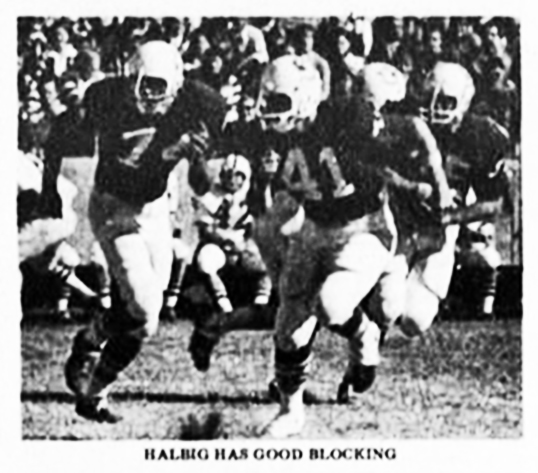 Wolfgang admitted to the West Texas Medical Center. This appears to be for knee surgery, based on later reports. 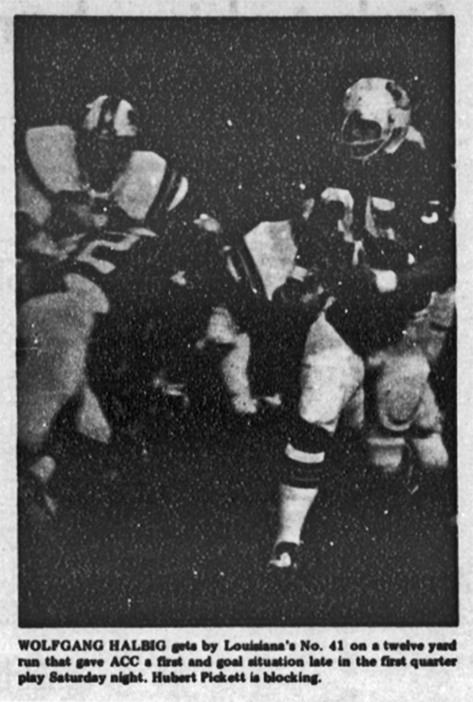 The Amarillo Globe-Times from Amarillo, Texas – Wolfgang is confirmed to be a Senior at Abilene Christian University, and plays running back for the Abilene Wildcats.

February 11, 1973: The Kraut’s shoes are vacant at Abilene Christian 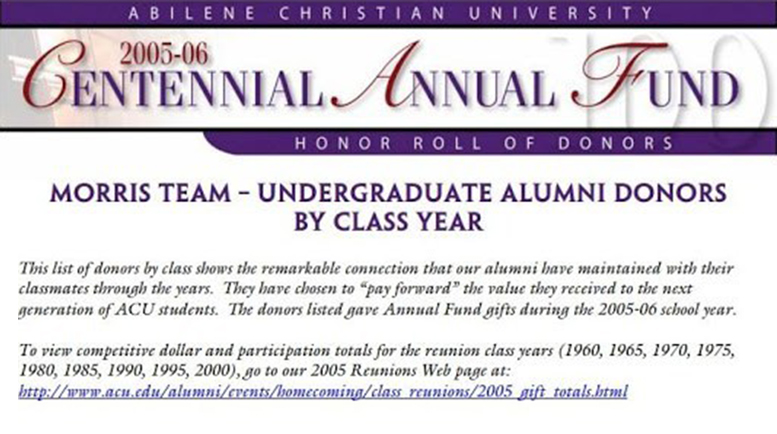 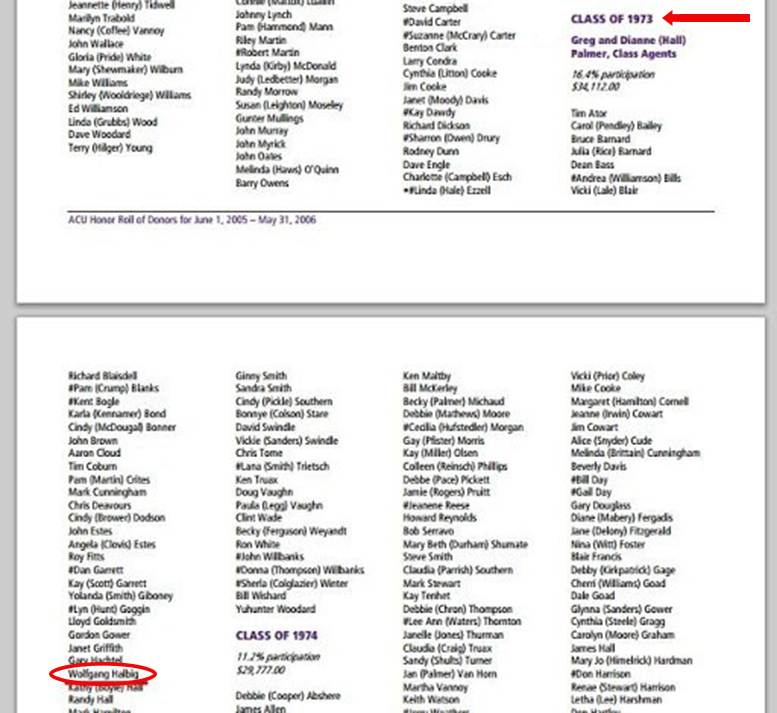 After graduation, Wolfgang “gets a phone call.” Lake Brantley hires The Kraut as a teacher in Seminole County. He thus returns to Florida.

Wolfgang then claims that he worked at Lake Brantley High School for only six months, bizarrely attributing his his sudden departure from teaching and coaching (which he had noted was his life’s ambition just two years previous)  to the clothing that female students at the school were wearing:

Q: Just explain to me what you’re talking about.

Wolfgang: Well, in those days, in 1973, the fad was girls didn’t wear bras and they had very short skirts, and it seemed like nobody wanted to enforce the dress code. And for young coaches in those days, it — you could get yourself in trouble if you were not careful. To me, I didn’t want to lose me certification… so I became a State Trooper. 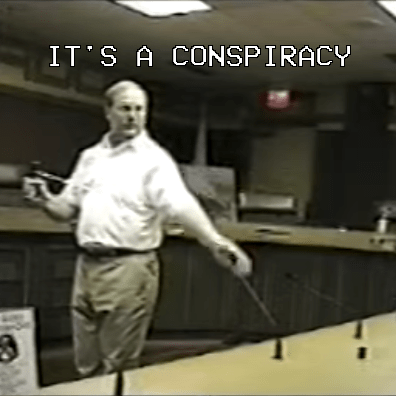 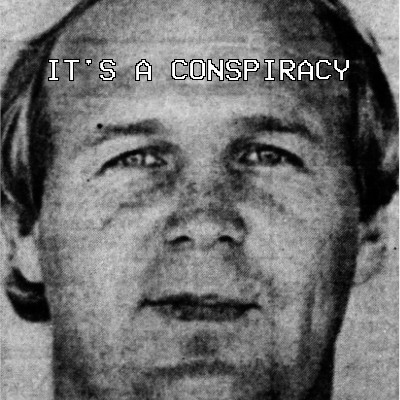 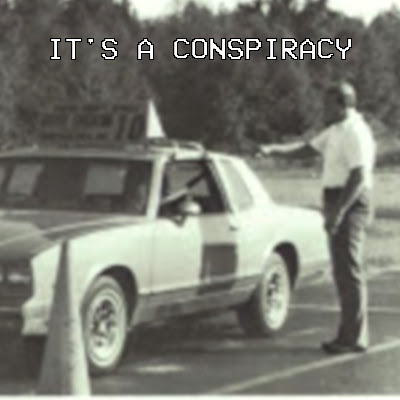 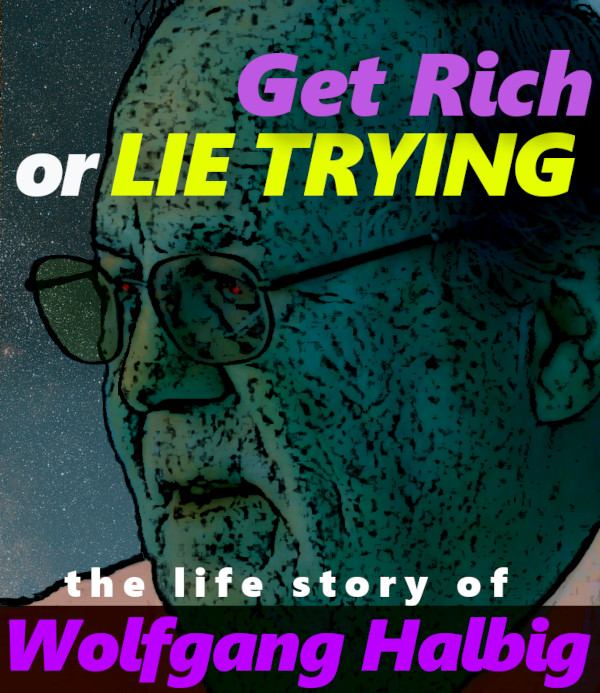 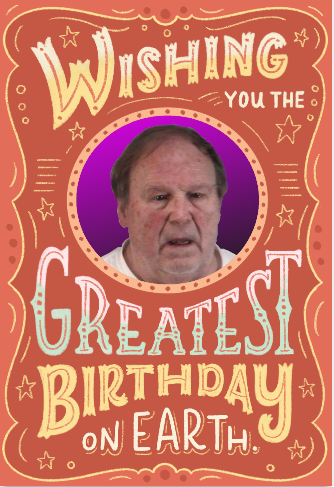 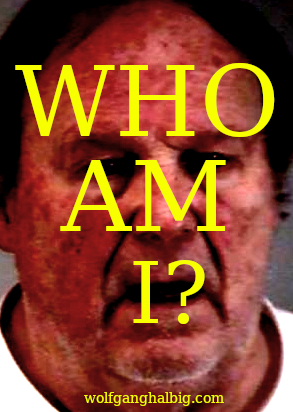